Anyone who knows me knows that I start to get a bit itchy when I go past the roundabout, particularly if it’s going into a family-friendly suburb where there are a lot of children.

But it’s especially if I am going to Snowmass. I am fine once I get on the mountain, because it is a spectacular ski area and town officials and developers can’t screw that up too much.

And they certainly have, in my mind, when it comes to the first phase of Base Village.

I had some friends in town who rented a suite in the Capitol Peak Lodge last week. So, their presence forced me into the village a few days. I tried to adapt, but I just kept getting mad at every turn.

A friend and I decided to check in for the rest of her family before their arrival on New Year’s Day. It took at least three phone calls to figure out which company was in charge of the condo they rented and then driving in circles trying to find the central check-in.

How can there not be a central check-in that is easy to find in a massive building that serves as one of the largest lodging properties in Base Village? Ridiculous.

We were told via phone to drive through the Treehouse drop-off and into the 30-minute parking area next door. It was there we found a guy standing in the snow waiting for us to unload groceries and luggage from my double-parked vehicle. Dumb.

After loading the bell cart, we were taken to a side door where it was so narrow the luggage rack hardly squeezed through. That just seems stupid when you have a massive building to work with.

We got to the elevator where I noticed a sign that has double-etched lettering on glass, which is mounted on stone with a light cast on it — making it appear like you have double vision. It’s even worse when you are drunk.

But it gets even worse: The building’s property management company doesn’t replace the sign’s black letters that have rubbed off so incomplete sentences are staring down the guests. One reads, “In –ase of f—e do not use ele-ators use stai-.” Unacceptable.

We arrived at the top floor, got out of the elevator and were hit with a massive waft of Pine Sol. Ick.

The penthouse was nice but upon further inspection, there is a door that leads to an industrial stairway from the master suite. Weird.

Also, for a family-friendly resort one would think that one of the three bedrooms would have two beds instead of a queen. Strange.

Plus, the occupants (friends) say the pillows are flat and need to be replaced. Please.

It’s hard not to rant about the bus situation or the garage at Base Village.

I took the bus from Aspen, which went to the mall and ended. Apparently, that’s as far as that direct from Aspen to Snowmass was going. Thank you to the driver who made an exception and brought me to Base Village.

But then I stepped into the garage and had no idea where I was going because there is no easy-to-see, visible sign telling me how to get to the actual village. Really?

I ended up in some stairwell that was advertising “One Snowmass” and signs saying sorry about the construction. Whatever.

I finally made it to meet my friends at the new Limelight Hotel, where I eventually calmed down. That, the new Collective building next door, the Crepe Shack and the ambience of the ice rink area are game-changers for Base Village.

That all appears to be working really well, so thanks to the Aspen Skiing Co. for understanding that logistics matter.

As a colleague recently said, “Logistics are the Achilles’ heel of Snowmass.”

I think many people can relate. 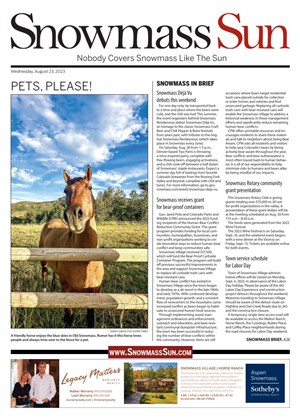