Vail Resorts will be loosening the purse strings for its employees a little bit more this year, courtesy of one of the strongest ski seasons ever.

The company announced Wednesday that it will be giving raises across the board to 8,000 full-time seasonal and year-round employees that will average 3.5 percent. Bonuses will be paid to top-level managers, too.

“Today is one of the happier days in my eight-plus year tenure as chairman and CEO of Vail Resorts,” said the company’s chief executive, Adam Aron.

Aron also announced to the staff at Vail Resorts that he’s anticipating the year-end financial report will be “highly successful.” The company’s fiscal year ended July 31.

The raises are 1.5 percent more than the 2 percent the company has given its employees for the last three seasons. On Sept. 11, 2001, the company froze raises until Feb. 2002. Aron said the raises the company is offering now are the largest in the last 20 years.

Raises, which will be merit-based, will vary in percentage from nothing to up to 6 percent, but will average 3.5 percent and will take effect in October.

In the third quarter financial report, Vail Resorts reported a net profit of $62.4 million ” the most profitable quarter in the company’s history. Last year, however, the company reported a net loss of $8.5 million on revenue of $710 million.

The company’s year-end financial report is expected later this month. 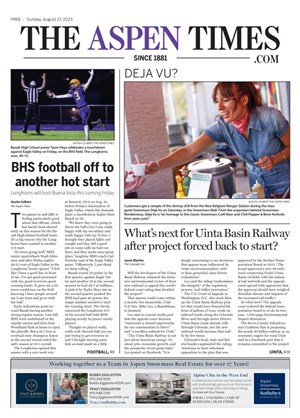