Snowmass officials look to Telluride for a little help | AspenTimes.com
YOUR AD HERE »

Snowmass officials look to Telluride for a little help

Weather permitting, the Snowmass Village Town Council and a handful of Aspen Skiing Co. executives will fly to Telluride today to check out its base village area.

The one-day trip is part of an ongoing effort by the Town Council and the town’s planning commission to better understand how competing ski areas have developed their base areas.

The Skico is expected to submit a development plan this spring for about 12 acres of land at the base of the Snowmass Ski Area known as Base Village, which today consists of parking lots, the ski area administration building and a vehicle maintenance facility.

Town officials flew to Whistler, British Columbia, earlier this month and stopped off along the way at resorts near Park City, Utah. Next month they plan to go Beaver Creek, Vail, Copper Mountain and Breckenridge.

The Skico’s planning and real estate departments are facilitating the trips and, in the case of the flights to Telluride, sharing the costs.

The group will be traveling on two planes, at a cost of $2,100 per plane. The town and Skico are each paying for one of the flights.

Earlier this month, the Skico suggested that perhaps the group could fly to Telluride and back on a private jet controlled by the Crown family, owners of the Skico. The idea was rejected for both practical and appearance reasons.

According to town officials, today’s flights are not viewed as an indulgence by the Town Council but as a way to save both time and money.

“If we book rooms for 13 people in Telluride in February, it is not going to be cheap,” said Snowmass Village Town Manager Gary Suiter. Adding up the costs of gas, meals and lodging made driving the four hours to Telluride and spending the night about as expensive as flying down and back in one day.

While at the resort, the group will meet with the mayor of Telluride and the town managers of Telluride and Mountain Village, the new planned community connected to the original townsite by a two-stage gondola.

The gondola, which is free to all riders, was financed by a public-private partnership. It is used by both skiers and workers, day and night, to move between the town and Mountain Village, which sits on a ridge above town.

The Town Council is especially interested in how public funds were used to help build the Telluride gondola. One key element of the Skico’s Base Village proposal is expected to be some sort of gondola connecting Base Village with the Snowmass Mall and the Snowmass Center, where the town’s post office and grocery store are located.

The group of officials and executives will also tour a number of lodges and timeshare projects in Telluride, including the Franz Klammer Lodge and the Peaks Resort and Spa. 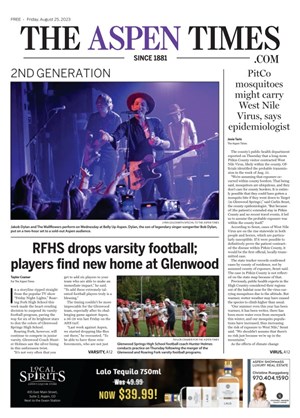