The Pitkin County Democratic Party float in the July Fourth parade was a great success. We were particularly pleased that State Sen. Gail Schwartz marched at the head of our column. Many people commented positively on our float, and we would like to thank the many creative Democratic activists who made it possible.

Special thanks to John McBride and his family, who provided the 20-foot flatbed truck and who rode escort ahead of our float on their vintage motorcycle. Andy Hanson got the flatbed here and hired the terrific band, which left us dancing in the street at the end. Michael McHugh drove the truck in the parade. Travis Fulton provided the gossamer blimp that read “Democrats: a lighter foot print” and also rode escort on his vintage motorcycle. The blimp was originally made for military rescue service and performed a rescue in one of the James Bond films.

Many thanks to Louisa Davidson and her friends, who brought the donkey, and to those who marched with us under the banners: Veterans for Obama, Hillary Supporters for Obama, Latinos for Obama, Eagle County Democrats for Obama and Republicans for Obama. Special thanks to those who decorated the truck and made the signs, especially Valerie Thompson, Sherry Flack, Marcia Goshorn, Heather Kent, Robin Riggs, Linda Adams, Lindsay Lussan, Kendra Lane, Karinjo Devore and Andy and Georgia Hanson.

Thanks to those who brought their Priuses, and special thanks to Raymond Auger, who drove his electric MGA, with Bedrishah Wilson and, who did not divorce his wife, Camilla Auger, for spending so much time with Blanca O’Leary on the parade. Gladys Augello and those who worked with her did voter registration. Thanks as well to County Commissioner Jack Hatfield and Ruth Hatfield, County Commissioner Rachel Richards and former Aspen mayor and Pitkin County party chair Bill Stirling, who marched with us, and to our tireless 21st-century organizer, Chris Bryan.

We would like to invite all the Obama supporters to join us for a party/celebration/momentum raiser (not a fundraiser) at 5:30 this Friday, July 11 at Blanca O’Leary’s house, 1500 Silver King Drive. The Obama chairman for Colorado, Ray Rivera, will be there to give us the latest news from the campaign front and answer questions. Our charming, smart and extremely helpful Obama Fellow for Pitkin County, Catherine Evert, and our excellent Obama coordinator for 17 counties (including Pitkin), Gabe Zoline, will be there as well. It is an event not to be missed! Please let Blanca know if you can be there: 920-4969 or BlancainAspenAOL.com. 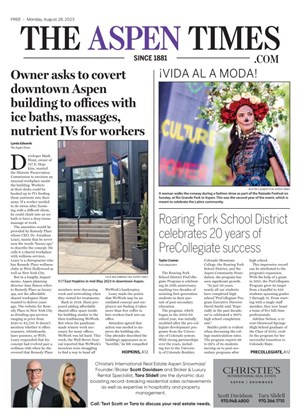