In with the new at Aspen School District | AspenTimes.com
YOUR AD HERE »

In with the new at Aspen School District

The new guard is the latest batch of hires in a year-plus of more than a few changes at the administrative level, including the hiring of superintendent David Baugh as well as the promotion of Tharyn Mulberry to assistant superintendent and Sarah Strassburger to Aspen High School principal last spring. (The district also brought on a new communications director, Kiki Lavine, this spring.)

“I think, as an administrative team, we’re a really new group, and so really making that administrative team come together to support all the schools in the best ways will be really important to work for me,” said Amy Kendziorski, the new middle school principal.

“It’s going to be new, new and fresh, which I think has value when there has been a lot of change to bring in some new eyes, and new people to engage with … and help grow the next steps for the school, for the middle school and for the district,” she said.

Amy Littlejohn takes the lead on the human resources front, making the move to an upvalley district from her previous position in the same role for three years at Roaring Fork School District. Littlejohn started July 1.

She fills the position previously held by Dan Blumberg, who was hired in late October last year and wrapped up in June. Littlejohn is no stranger to overseeing human resources in a high cost of living area. (Before her time in the valley, she spent five years at Bellevue Union School District in Santa Rosa, California.)

Recruitment is a top focus as Littlejohn begins in the new role — there are nearly two dozen open positions in the district as of July 1. She also hopes to delve into the health care benefits available to staff with aims to dial in on the cost of those benefits, she said.

MEETING IN THE MIDDLE

“It’s been fabulous, it’s been busy but fabulous,” Kendziorski said of her time so far. She and Ramey have been in frequent communication to get the ball rolling, and Kendziorski jam-packed her weeks on the job meeting members of the school community.

“I feel like my brain has been filled with so many people and so many ideas and new things that I can’t wait to actually really begin and have it be an action, but I need some time to get that done, so it’ll be a busy, busy summer for sure,” Kendziorski said. Her summer work will focus on filling open positions and planning and preparation for the new year.

Ramey is wrapping up her 16th year in education, the bulk of that time spent at Roaring Fork School District, where she has worked since 2009. She comes to Aspen Middle School from the Riverview School in Glenwood Springs, where she was the dean of instruction for four years. She fills the position vacated by Jayson Thomas.

“My goal is to support the vision and the mission of the school district and of Aspen Middle School,” Ramey said. She’s entering the job with a collaborative mindset, she said, “with that openness of learning what everyone is coming to the table with, and thinking of ways that we can continue to grow programs.”

Those programs include implementation of an International Baccalaureate (IB) curriculum, which the board of education approved for middle school and elementary school students this spring. The high school already offers IB courses.

Ashley Bodkins is likewise excited about IB implementation, she said. The new Aspen Elementary School principal arrives on campus July 19. She fills the role previously held by Chris Basten, who announced earlier this year he would depart after five years at the school to take a new gig at High Peaks Elementary School in Boulder.

Bodkins has roots in the Elk Mountains — she and her husband have had a place in Crested Butte for years, and Bodkins spent time in Colorado a few decades back — but has worked in the greater Boston area for most of her education career. Prior to joining the Aspen team, she was the principal at Greenlodge Elementary School in Dedham, Massachusetts, for five years.

“Teaching kids where they are” is a key component of her educational philosophy, she said.

“I think that if children don’t feel safe, if they don’t have those, like basic emotional needs met, they’re going to struggle with learning. … I feel like creating that safe place for kids to learn, creating and maintaining community, is really important,” she said. “I really am of the belief that all children can learn, and really keeping a growth mindset too — that, while kids may not know something yet, it doesn’t mean that they won’t eventually be able to learn it.” 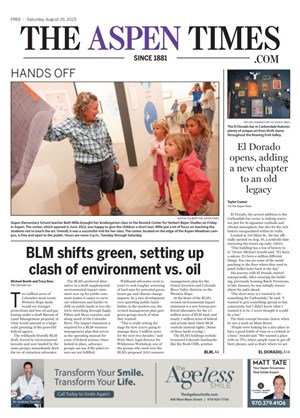